My collection is complete... 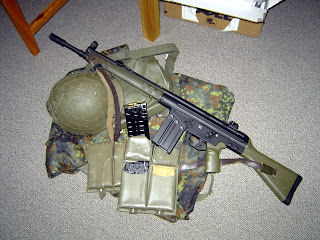 Just to make a few people envious, I've bought a new (and so far my most expensive) replica gun.

It's a Classic Army SAR M41, replica of the Schwabenarms M41, which in turn is the civilian version of the H&K G3.

Therefore, I've just about finished my collection - I now got one full set of combat gear of the Bundeswehr as issued 1993, when I did my military service.

Note to other collectors - yes, the flak jacket DOES have flecktarn camo - that's correct for that time period! Back then we were issued with normal green uniforms and gear, and a brand new green nylon backpack, but the flak jacket itself never was produced in plain green for some reason... the other camo uniform parts were just being phased in, but training units didn't rate new uniforms - but no old flak jackets existed.

#Matchbox 1:700 HMS Ariadne - unpainted two-colour like in the old days...